When we send men and women into space, we go to great pains to make sure that they are highly trained, physically fit, and the best of the best. Many have multiple degrees, doctorates and pilots licenses, and they endure a long, rigorous training regimen that will ensure if ever they end up stranded somewhere their survival skills will be up to the task. It's a pity that aliens from far off galaxies don't see it the same way. Otherwise, we wouldn't have Abuba the Alien, a basic point-and-click adventure created by Robin Vencel of Pencilkids.

You may also like: Spongebob Crazy Adventure 3 and Adventure Time Games: Flambo's Inferno

Abuba is most definitely not ready to survive in the hostile environment that is suburbia. Cold, hungry, tired, and scared after crash landing Abuba just wants to phone... er, just wants to go home. It is up to you, intrepid gamer, to help him (her? it?) find food, warmth, and a way to call the folks to come get Abuba, who speaks and acts like a 4 year old.

Escort Abuba through the neighborhood and help him (her? it?) take care of basic needs and eventually phone...er, go home. Any resemblance to another cute lost alien is, surely, entirely coincidental. Unfortunately the road home is never easy, so it will be necessary to find and use a lot of objects (and break a ton of laws), as well as participate in some mild animal cruelty to set Abuba on his path.

Gameplay is simple and straightforward. The cursor changes to a hand when hovered over usable objects, so pixel hunting is at a minimum. Pick up and combine objects to accomplish the goal of the screen, whether to feed the little alien or find another piece of his (hers? its?) complicated communication gadget so Abuba can go home. 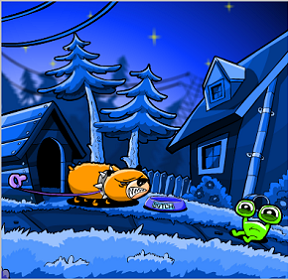 Analysis: Rendered in a very Saturday morning cartoon-like style, Abuba the Alien is none-the-less a fun little time waster. The artwork is vividly done in shades of dark blue (it is, after all, a dark and stormy night). Cute little animations, twinkling stars, unobtrusive music, and other sound effects show that although it may be geared for kids, Abuba the Alien is still a well thought out, well put together little adventure, albeit an easy one. Most experienced gamers will blow through this thing in about 10 minutes or less.

There are some minor quibbles. Abuba can get a little annoying after a while. Some of the actions involved in getting Abuba home are overly complicated or defy logic altogether. There is also a lot of law-breaking involved, mostly destruction of personal property. Since the friv game appears to be targeted toward a younger audience, is this the sort of message we want to be sending? Oh well, at least Abuba is polite. Manners are important, kids! Especially when committing property crimes. When playing you run the risk of an ad popping up halfway through the game as well.

Still, despite the problems, Abuba the Alien is a cute, fun way to chase away the Monday morning blahs. Forget the coffee, take a casual gameplay break and help get Abuba home! Abuba say thank you. And so do we.