Bird Pax is an innovative card game developed by Dassa Games Ltd at Friv Xyz games. Aim of the game is to earn as many cards and wingspan as you can. The number on the card indicates the bird's wingspan. A larger wingspan mean a stronger card. Don't forget to read the in-game instructions of Bird Pax.

I remember when you didn't need all this fancy computer equipment with all the cd-roms, and the rams, and the video cards, all of it costing hundreds maybe thousands of dollars, to have a good time. No, all you needed back when I was a kid was a deck of cards. Sometimes you had the basic playing cards, sometimes you got the funny cards with cartoon fishies on them or comical pictures of old ladies, and that was all you needed to enjoy a fun filled afternoon with your friends. Now, thanks to KnowIn Games, you get to relive the spirit of those classic card games on your high end thousand dollar machines with the simple and fun Bird Pax card game.

If you've ever played the card game War, then you're already most of the way there in grasping how Bird Pax works. Each card has a bird on it, a number value representing that bird's wingspan in centimeters, and an associated color which indicates which family the bird belongs to. Both players have a deck and from that deck maintain a hand of six cards. During each turn you and your opponent both play one card and the card with the higher wingspan wins the hand and all the cards currently in play, and the winner will also go on to play the first card in the next hand. If both cards played have either the same wingspan, or family color, then you go into "Pax" mode. Here, three cards are played face down from each player's deck as a kind of wager, and then both player's again play a card to see who wins it all (unless, of course, these new cards initiate yet another Pax). 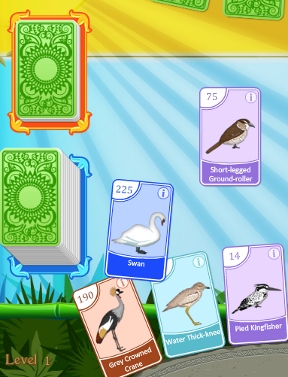 Besides having a hand as opposed to merely drawing from the top of the deck, Bird Pax differentiates itself from War in implementing the concept of families into the game. If you have more than one bird in the same family, you can play them like a chain combo. That is, say you play a bird from the crane family, and you have two more of those in your hand. Your opponent plays a member of the falcons that would beat your first crane. You can play another one of your crane cards to beat the falcon. Just make sure that both cards combined really will win otherwise you'll just be throwing your cards away. It's also important to note that you have to play each card individually. That is, in order to keep the chain going, you have to beat the wingspan your opponent has in play with whatever card you play.

Play continues like this until you have reached the wingspan goal for each stage. This is tracked both numerically, and visually by a line running through the center of the playing field that will shift up and down as collective wingspan totals shift back and forth between you and your opponent. If this all sounds a bit complex, don't worry. Just like the cherished card games of our youth, it takes longer to read the rules than it does to actually understand and play the frivfreegame. Just, uh, you know, don't try and stick your laptop in the spokes of your bicycle when you're done. That can turn out to be kind of expensive, and, um, it doesn't really make the same sound as playing cards anyway.

Analysis: Bird Pax is simple, charming, and above all, fun. Flawless by no means, this cute and easy card game does a fantastic job of taking an established classic and tweaking it for a much more compelling and entertaining result.

Something that always bothered me about the old card game of War is that there wasn't any skill involved. There wasn't even really luck, or even a game. Once the deck was shuffled and split among the players, the ultimate outcome was already predetermined leaving us to spend however long to figure out what that ending would be. By adding in a playing hand and the family associated bring along combinations, Bird Pax adds depth and strategy to a game that had none of these things. And yes, there can be quite a bit of strategy involved with Bird Pax as you'll see the first time your 250 value bird gets taken down by a bunch of waterfowl.

But though there is depth and strategy, what makes Bird Pax compelling is that it capitalizes off of a fairly simple system. Each hand is over in a matter of seconds, no round lasts longer than a few minutes. Not particularly challenging, this card game is easy to pick up, and nearly anyone with modest math skills can play. Even if your mental math is terrible, the game helps you out with icons that indicate which cards in your hand would win, and which would launch a Pax. And all of this is offered up with bright friendly graphics, and, okay, I'll admit it, I just really like the pictures of all the pretty birds.

Of course, there's plenty that I would like to see improved in Bird Pax. The most pressing, to me, is that the target wingspan for each level is not clearly defined. You have the indicators, true, but there's no real finish line to let you know how close or far you are from finishing a round. Also, I found the AI at work here to be pretty weak. Yes, occasionally you'll get sucker punched with a combo, but for the most part the computer opponent is a pushover. This could be remedied by offering a multiplayer option, and indeed KnowIn games is supposedly working on it, but it's not here yet. Finally, and this is not so much criticism as suggestion, I think what this game really needs is customizable decks with cards that can be bought and traded. Oh, and, um, little fun facts about the birds would be nice, for, you know, my kids.

Simple rules, a nice balance between thoughtful and casual gameplay that tips towards the latter, and a bright, cheery presentation all come together to establish Bird Pax as an endearing and somewhat addictive experience. Easily squeezed into a coffee break, this card game may not have tapped into its full potential quite yet, but we definitely like what we see so far.